You can compare only 4 properties
Compare Reset

Located in Cape May County in the state of New Jersey, Ocean City is a gorgeous city with many unique attributes that help it stand out from the rest of the state. The city is the largest in its county with around 12,000 residents that build up its population.
Known first as Peck’s Beach, a seven-mile stretch of sand dunes, meadows, and cedar swamps was probably named for John Peck, a whaler who used the island as a staging spot for his whaling operation. The island had served as a summer fishing camp for local Indians, a grazing land for cattle driven out from the mainland, and an occasional hunting or picnic spot for mainland residents who would come out by boat.

Original ownership of the land was by the Somers family. Several individuals had made their home on the island, most notable of which was Parker Miller who had served as an agent for marine insurance companies. He and his family lived in a home at about what is now the southwest corner of Seventh Street and Asbury Avenue.
In 1879 four Methodist ministers, Ezra B. Lake, James Lake, S. Wesley Lake and William Burrell chose the island as a suitable spot to establish a Christian retreat and camp meeting, on the order of Ocean Grove. They met under a tall cedar tree which stands today at 6th Street and Asbury Avenue.

Having chosen the name “Ocean City”, the founders incorporated the “Ocean City Association”, laid out streets and sold lots for cottages, houses, hotels and businesses, many of these now serve as vacation rentals in Ocean City, for the families that chose to visit.The Tabernacle was built between Wesley and Asbury Avenues and between 5th and 6th Streets. Camp Meetings were held by the following summer.

Ocean City is best known for being a very family-oriented seaside resort because of its gorgeous scenery and world famous boardwalk. The Ocean City boardwalk is over two miles long and has a variety of entertainment venues located throughout the strip. The boardwalk was built in 1880, so it serves as a historic monument, as well.

The boardwalk has multiple amusement parks, among them “Gillian’s Wonderland Pier,” and “Playland’s Castaway Cove.” The boardwalk also has bike and surrey rentals, movie theaters, an arcade, and the famous Ocean City Music Pier.

Ocean City is best known for their beaches, their family oriented spirit, and the gorgeous view from the boardwalk. It is a beautiful little city located in the heart of New Jersey that is a well-loved spot for families.

From these beginnings Ocean City has grown into the town we know today. The first bridge was built to the island in 1883. The railroad soon followed. The first school began in 1881. The boardwalk grew and was relocated several times. The ship Sindia joined other shipwrecks on our beach. A large fire in 1927 changed the town significantly. 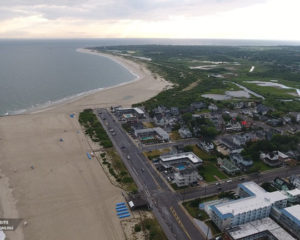 The Cove Beach in Cape May, NJ

Welcome to The Cove Beach in Cape May, New Jersey. A great beach with fabulous sunset views, the Cove Beach 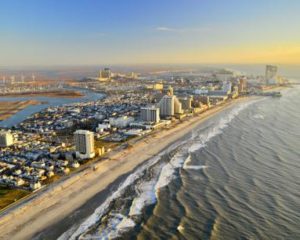 Things to do in Atlantic City

Our top ten items to do in Atlantic City. Please bare in your mind the listing doesn’t indicate any particular